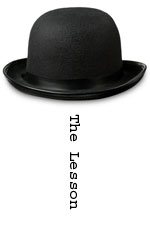 Fernando Sorrentino
The Lesson
Translated from the Spanish by Clark M. Zlotchew