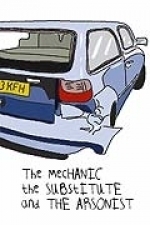 Nicholas Mathisen
The Mechanic, The Substitute and The Arsonist