short stories     interactive     word games
Fernando Sorrentino
There's a Man in the Habit of Hitting Me on the Head with an Umbrella
Translated by Clark M. Zlotchew 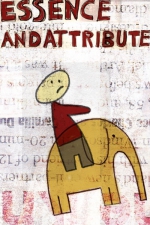